skip to main | skip to sidebar

Outside the Triangle: Eating in Hawaii

Hawaii: beautiful beaches and beautiful faces. I always thought folks in the southern US were some of the nicest people in the world, but there is something particularly special about Hawaiians...perhaps the secret is in their passion for food. Due to its location, these tropical islands are influenced by asian cuisine. There is even a good sized Chinatown in Honolulu were you can find all kinds of delicious fresh fruit and fish. 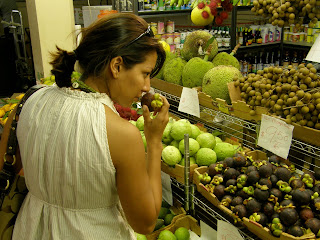 Some of my favorite food finds are:
Peppa’s Korean BBQ, Honolulu, Oahu- For $8.99 you can get a combination platter that could feed you for days. Platters include your choice of meat (BBQ chicken and beef jun both excellent), 2 scoops of rice, fried dumplings and zucchini Plus FOUR sides. I was amazed at the variety of kimchee (spicy pickled vegetable) there must have been 12 or more sides to choose from.
Kaleo’s Bar and Grill, Pahoa, Hawaii- A surprising find in the sleepy saloon town of Pahoa. The setting of this town looks like something out of an old western. The atmosphere was quaint and romantic and the food was excellent. We dined on tempura fried ahi tuna roll, french onion soup, beef tenderloin, and a roasted vegetable salad with goat cheese croquette. Ooo Whee! I highly recommend every bit of it! 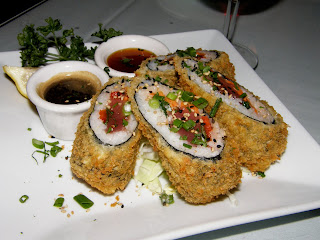 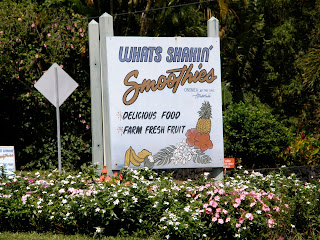 SMOOTHIE TIME
Chinatown Fruit Smoothie- This ain’t your typical fruit smoothie. Choices include any combination of exotic tropical fruits like Jackfruit, Durian, Lychee and Rambutan. Everything is fresh and made to order. I had the Avocado + Mango smoothie and my DH had the pineapple + lychee. Both were amazing.
Lanikai Juice- A popular storefront in Kailua, Oahu. This family owned juice shop uses local ingredients and also has fruit/granola bowls available that looked especially hardy and delicious. They specialize in Acai juice which is reportedly packed with antioxidants and super nutrients which can aid in weight loss.
What’s Shakin- This popular stand is on the 4 mile scenic drive on the Big Island north of Hilo. Most ingredients come from the What’s Shakin farm. Everything is all natural. I had the Kona Coffee and Chocolate/Banana and my DH had the Papaya Paradise. After paying $6.50 a drink and waiting for over 40mins, the anticipation of this place got the better of me and unfortunately the smoothies didn’t live up to the hype.  I found this smoothie shack a little too thick and rich for my taste.
MAUI
In Maui, the locals love fried rice for Breakfast and you know what? I love it too! Here are photos of some of the best fried rice:
The Gazebo Restaurant: bacon, kaiula pork, veggies w/ a scrambled egg 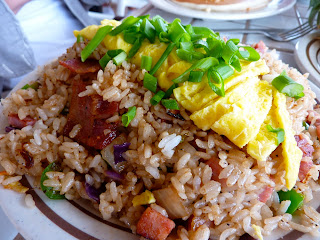 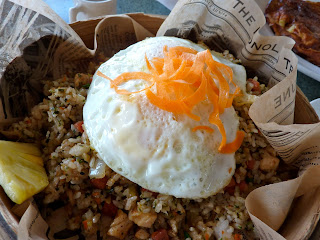 Posted by The Restaurant Guru at 4:39 PM No comments:

As seen in Fifteen 501 Magazine
If you were to cut a vein of Robert Poitras, he'd undoubtedly bleed Carolina blue. Poitras, a third-generation Tarheel, is devoted to his beloved state, and the community of Chapel Hill in particular.
While studying abroad in Switzerland several years ago, Poitras traveled throughout Europe and was fascinated by the unique flavors of food and drink that each small community cultivated. It's this local concept that inspired him to open Carolina Brewery in 1995.
Hometown creations
Carolina Brewery - the oldest of its kind in the Triangle - makes patrons feel at home by creating a relaxed environment.
"We wanted to create a 'Cheers'-like environment where locals and regulars could have their place," Poitras says.
The brewery also offers a loyalty program called the Brew Crew to reward customers. Members who sign up online are invited to free beer tastings and can earn points for various rewards, including serving as brewer for a day.
Head brewmaster Jon Connolly's concoctions have garnered various awards, including a Gold at the Great American Beer Festival for its Flagship IPA, a Gold at the World Beer Championships for its Copperline Amber Ale and a Silver at the World Beer Championships for its Sky Blue Golden Ale.
The establishment is focused being the best in its own back yard. Its fine beers are available in several locations from the Triangle to the coast. This summer, through a partnership with the Durham Bulls, Carolina Brewery will produce a new beer called The Bull Pen Pale Ale. The brew will be available at multiple locations throughout the park, including at a Carolina Brewery stand on the main concourse. 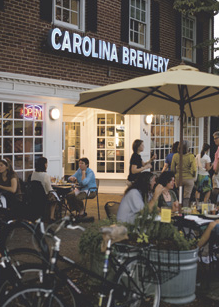 But it's not only about beer. Each quarter, the brewery creates a seasonal menu using farm-fresh products from throughout the region; the head chef even handpicks ingredients each day. Far from the typical bar menu, much of Carolina Brewery's cuisine is made from scratch. Popular favorites include hand-pattied hamburgers and barley grain focaccia pizza.
Culinary expansions
In August 2007, Carolina Brewery opened a wholesale beer production facility and adjoining restaurant in Pittsboro, where beer tours are given from noon to 1 p.m. on the second Saturday of each month. For early birds, the Hop Shop opens at 7 a.m. and offers fresh-baked doughnuts and treats from the brewery's pastry chef.
Music fans can enjoy the Summer Music Series at the Beer Garden, and the Pittsboro location hosts a farmers market beginning each April.
With all this activity, Carolina Brewery still finds time to give back to the local community. Last year alone, it donated to 95 charities including The Ronald McDonald House, where it provides and serves food several times a year.
There's no doubt that Carolina Brewery is an institution steeped in local tradition. It's a challenge to think of a better place to sit back and drink in the local flavor.
Christie Hadden is founder of My Restaurant Guru, a Triangle-based Web site that connects people with area restaurants. To learn more, visit www.MyRestaurantGuru.com.

Hours: Dinner served Wednesday to Saturday 6pm to midnight, Bar open 5pm to 2am, Sat/Sun Brunch from 11am to 3pm

Yes, it looks like a diner with the chrome and red vinyl bar stools and double horseshoe bar, but this ain’t your grandparents diner of yesteryear. Oh no my friends, Ashley Christensen, owner and chef, has taken great steps to ensure that this diner is different. It has been a long; yet deliberate road for Christensen and one that has paid off. She grew up in the Triad in a household where food was important and participated in her family’s organic garden and watched her father tend bees. As the recent farm to table, slow food movement gains popularity with mainstream eateries, Christensen adopted the concept early on. This is because she has already lived the slow food movement as a way of life. Every ingredient that Christensen uses at Poole’s Diner is of the highest quality; taking daily deliveries of the freshest local fare from farms like Harlands Creek and ECO. Christensen’s menu changes daily to ensure that the ingredients are handled respectfully whereby they become the stars of the show. It is here at Poole’s Diner where action and art meet at the dinner table. 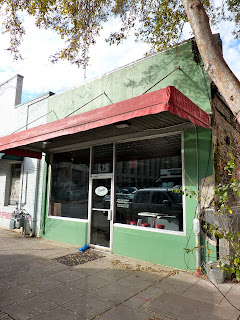 Christensen has worked beside local powerhouse chefs like Andrea Reusing of Chapel Hill’s Lantern and Scott Howell of Nana’s in Durham, and was executive chef of Raleigh’s Enoteca Vin for 7 years where she received great notoriety. It was at Vin where Food & Wine Magazine featured the restaurant in an 11-page spread, which put Christensen on the map. After leaving Vin, it was time for Christensen to open her own place and Poole’s Diner fit the bill.

The History of Poole’s Diner begins in 1945 when John Poole opened Poole’s Pie Shop to serve a delectable array of homemade pies. After six years of serving sweet treats, John expanded his menu to include hot plates and sandwiches thus the place was renamed Poole’s Luncheonette. Soon word got out and lines of people began to form around the building. Poole’s became established as one of the first downtown eateries in Raleigh. Years later and several changes of ownership, the building came available. Christensen seized the opportunity and purchased Poole’s Diner in 2007. After nearly a year of renovations the new reincarnation of Poole’s Diner re-opened in 2008. Most of the retro-chic restaurant incorporates original décor from Poole’s bar circa 1945. The establishment is intended to be recession proof serving simple, accessible food for under $20. Everything is made to order and it takes time, so don’t expect to dash in and out of here. Its location is ideally situated to dine before or after a show and is quite popular with many of the performing artists. Poole’s does not accept reservations and due to its ever-growing popularity you may want to come early or late to avoid the hour to hour-and-a-half wait in line. It is definitely worth the wait just to savor the Macaroni and Cheese which is claimed to be the best in the Triangle.
Posted by The Restaurant Guru at 11:57 AM No comments: